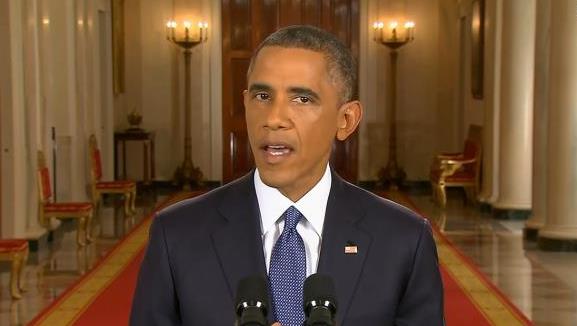 “Mass amnesty would be unfair. Mass deportation would be both impossible and contrary to our character. What I’m describing is accountability — a common-sense, middle-ground approach,” said Obama. “If you meet the criteria, you can come out of the shadows and get right with the law. If you’re a criminal, you’ll be deported. If you plan to enter the U.S. illegally, your chances of getting caught and sent back just went up.”

The plan makes it easier for foreign workers trained in high-tech fields to enter, and stay in, the country. And it refocuses the nation’s entire immigration enforcement might on a smaller and more dangerous pool of immigrants—those with criminal records, ties to terrorist organizations or gangs and people who crossed the border in the past year.

Border security has been a hotbed of argument but the plan will shift the Department of Homeland Security (“DHS”) enforcement resources toward the southwest border with Mexico. More Border Patrol agents, immigration judges and U.S. attorneys will be sent to the southwest border to speed up deportations of people caught illegally crossing. Immigration and Customs Enforcement agents, who normally patrol the interior of the country for undocumented immigrants, will also be tasked with finding people who have recently crossed the border. Homeland Security will now focus its interior enforcement efforts almost exclusively on people convicted of serious crimes, who are members of gangs or pose threats to national security. They will also target recent border crossers to try and discourage future waves of illegal immigration.

The plan will also change the way the government handles undocumented immigrants living far from the border in the interior part of the country. As the administration is selling it, they want to be “deporting felons, not families.”