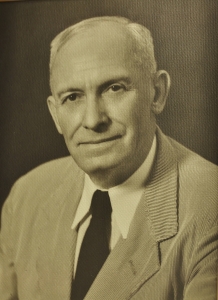 Maxwell V. Beghtol joined the firm as an associate in 1910 and attained partnership in 1913. Maxwell was a very highly regarded and accomplished trial attorney. He represented clients ranging from public officials accused of corruption to theaters and radio stations. Maxwell had a true “baptism by fire” in the courtroom. In one of his early trials, Maxwell and Edmund C. Strode were litigating a trial against a man charged with seducing a young woman and impregnating her. During the trial the woman’s brother pulled out a pistol and shot and killed the defendant. Maxwell and Edmund took cover under their desk and were not injured as the shooter was quickly subdued. Maxwell was not frightened away from trial work by the experience, however, he always made sure to take a close look at the situation of each courtroom from that day forward.

Another interesting story involving Maxwell Beghtol occurred around the time the Lincoln National Bank and Trust was robbed in 1930. Following the robbery, Maxwell got a visit from a man carrying a pistol who was an alleged friend of John Dillinger. The man asked Maxwell if he would defend Dillinger if he was charged. Maxwell replied that he would have to learn more about the facts and defenses Dillinger would plan to use before he could give an answer. The man left Maxwell’s office and never returned.

Maxwell became the president of the Lincoln University Club in 1942.