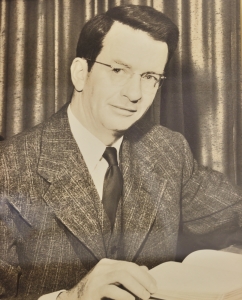 Lee Rankin joined the firm in June, 1930 during his third year of law school at the University of Nebraska College of Law. Originally he applied to the firm and was rejected by Maxwell Beghtol. He did not take “no” for an answer. Instead, he read about a case Maxwell was litigating in the newspaper, examined the file in the court clerk’s office, and decided to write a fifty page trial brief. After finishing the brief he surprised Maxwell and handed it to him in his office. Maxwell read it over and hired Lee as his clerk two days later. Lee made partner in 1931.
Lee went on to become a member of the Lincoln School Board and President of Lincoln Public Schools in 1953. From 1953-1956 he served as the Assistant Attorney General in Charge of the Office of Legal Counsel for the United States where he argued for the Government, against segregation, in the landmark case Brown v. Board of Education of Topeka, Kansas. In 1956 he served as the Solicitor General of the United States until 1961. Following the assassination of President John F. Kennedy, Lee served as General Counsel of the President’s Commission of the Assassination of President Kennedy (also known as the Warren Commission) in 1964. Lee also acted as the manager for General Dwight D. Eisenhower’s (later President Eisenhower’s) presidential campaign in Nebraska.