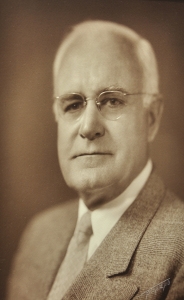 Guy C. Chambers became a partner in 1971 following the merger of the firm of Chambers, Holland, Dudgeon and Beam into Mason, Knudsen, Berkheimer and Endacott. Guy Chambers had been a leading attorney in Lincoln for many years and was well known for his representation of the Rock Island Railroad as General Counsel for Nebraska and a large number of insurance carriers and clients. Guy also helped found Lincoln Legal Aid and was the president of the Lions Club in 1926.